The full inside story of the breathtaking rise and shocking collapse of a multibillion-dollar startup, by the prize-winning journalist who first broke the story and pursued it to the end in the face of pressure and threats from the CEO and her lawyers.

In 2014, Theranos founder and CEO Elizabeth Holmes was widely seen as the female Steve Jobs: a brilliant Stanford dropout whose startup “unicorn” promised to revolutionize the medical industry with a machine that would make blood tests significantly faster and easier.

For years, Holmes had been misleading investors, FDA officials, and her own employees. When Carreyrou, working at The Wall Street Journal, got a tip from a former Theranos employee and started asking questions, both Carreyrou and the Journal were threatened with lawsuits. Undaunted, the newspaper ran the first of dozens of Theranos articles in late 2015.

“The way Theranos is operating is like trying to build a bus while you’re driving the bus. Someone is going to get killed.” 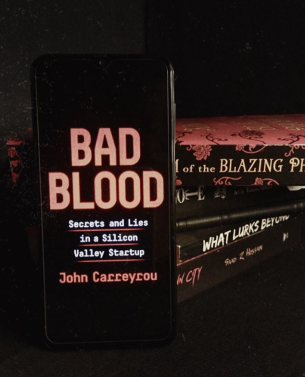 The couple of reviews I read of this book made me pick up this piece of non fiction because it just seemed so intriguing.

Elizabeth Holmes is a very interesting personality because she is eccentric, ambitious and crazy captivating. Her exuberant confidence and self efficacy is something I’ve always wanted and I thoroughly enjoyed reading about it. I remember telling everyone about this big scandal when I started reading this book months back because you just can’t hold it in, you know? It’s a 9 billion dollar worth startup by someone I was inspired by when i had seen the headline “Youngest Female Billionaire”.

It is baffling how Elizabeth Holmes had everyone enamoured by her and was able to evade every scrutiny for so long. I often felt frustrated because it seemed to me that Theranos could have brought some gigantic changes in the medical industry if Elizabeth Holmes wasn’t so awfully fickle and stubborn.

There are quite a lot of jargons and even more names because it is extremely well documented by the author whose persistence is remarkable. The details were tedious at times and I kept losing focus which is why it took me months to finish this book.

I highly recommend this book to those who love reading about scandals and don’t mind a lot of names and details.

Hello there! I'm Sakura, or you may know me as Bushra, depending on what brought you here. You'll mostly find me posting book reviews but as a sophomore in a business school, I do sometimes lack the time to read books so expect movie or series reviews and tidbit random content. View all posts by Sakura